If you’ve chosen to upgrade from an Android tablet to an iPad, transferring your old data from Android to an iPad may be your most formidable challenge. After all, the two devices operate on fundamentally different systems, making data transfer from Android to iPad difficult. But, as tough as it might be, it is not impossible. That said, what are the best ways to transfer files between an iPad and Android?

The Following Are The Best Methods To Transfer Files To And From iPads And Androids:

1. Transfer Between Android And iPad Files With The AnyTrans App

AnyTrans is a comprehensive file management software that functions with all iOS devices. You can see and manage your device backup files, copy files to and from your device, and combine it with your iCloud account for simple management.

With that in mind, I’d like first to teach you how to transfer all files from an Android device to an iPad at once if you need to transfer data between an Android tablet or Android phone and an iPad.

Of the many apps available, one of the best solutions for facilitating data transmission between various platforms is the AnyTrans app. Without any data loss, AnyTrans allows you to transfer music, videos, ringtones, images, contacts, calendars, and documents from Android devices to iPads and iPhones.

Follow the below instructions to quickly transfer files from an Android device to an iPad after first downloading AnyTrans for free on your Mac or PC.

That said, do you already have Dropbox installed on your device? Then, you may access cloud services using Dropbox. The Dropbox cloud server offers 2GB of free storage for media file uploads.

Keep in mind that if you wish to use the free feature, you may only upload 2GB at a time, and once downloaded on the new device, you would need to remove the online storage to make space for more files to be transferred.

Remember that you may access and utilize your uploaded data by logging into an existing account. Thus, Dropbox allows you to sync data across many devices. However, if your gadget can’t establish a reliable internet connection, it won’t be accessible.

3. Use Move To iOS App To Transfer Docs From Android To iOS

To transfer Android data to iOS, you must reset the iPad if the device has already been set up. Here’s how to move data from an Android device to an iPad using Move to iOS:

4. Transfer Media from Android to iPad With SHAREit

When both devices are linked to the same WiFi network, you may transfer documents across Android and iPad devices using SHAREit. This software became popular on Android for sharing games and audio in recent years.

Additionally, transferring data doesn’t require an internet connection. Therefore, you may even transmit files by connecting to either device hotspot and starting sharing as long as both devices have SHAREit installed.

Once you have SHAREit on your iPad and Android, the following are easy steps to use the app to send files:

To receive files from the senders’ device, do the following: Will The US iPad Work In The UK? 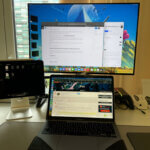 How Can I Transfer My Notes From iPad To Computer With Images? Why purchase an iPad when you have an iPhone?